As Nobel Prize winning physicist, Eugene P. Wigner said, “…it will remain remarkable, in whatever way our future concepts may develop, that the very study of the external world led to the conclusion that the content of the consciousness is an ultimate reality.”

To investigate that ultimate reality, this department only focuses on the three branches of physics that deal with consciousness. The first has been incorporated into academia and the other two are still outside of mainstream physics:

This branch introduced the first scientific evidence for the involvement of consciousness in shaping reality at the subatomic level.

This branch views reality as a VR simulation, or what some call a holographic universe, frequently known as the Matrix.

This branch is so new, it doesn’t appear to have a commonly accepted name yet. We use “electric geometry” because the physics seems to be a combination of the electric universe theory and the metaphysics of sacred geometry.

Both our Physics and Metaphysics departments consider consciousness to be primary. As a result, we host videos for both departments on our YouTube channel, All Reality video: 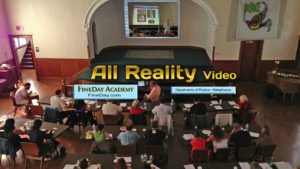