(Videos at the end of the article)

A Report by David Watkinson
June 2013

While working on my animation of the Delayed Choice Quantum Eraser (see our Quantum Physics section), I contacted Dr. Marlan Scully, the creator of the experiment to ask a few questions. I was then very privileged to be invited by Dr. Scully to visit with him and his team at Texas A&M.

Dr. Scully is simultaneously a professor with a lab at Princeton, Texas A&M, and Baylor universities. He is a Yale educated physicist best known for his work in theoretical quantum optics and is author of over 700 scientific articles and text books like Quantum Optics.

Since I was originally going to Austin to work with Dr. Paul Smith (who was a major in the army / CIA remote viewing program), Paul came with me to spend the day with Dr. Scully and his colleagues.

The day started with presentations by physicists explaining their particular area of work with lasers: X-ray crystallography, mammography, CT airport security (XRAY SUPERRADIANCE); Reading anthrax through an envelope, taxonomy of plants (BIOPHOTONICS); Seeing submarines through murky water (BRILLOUIN SCATTERING); Shooting down ICBMs coming out of the troposphere; and finally the detection of osteoporosis with lasers. Then some of the physicists took us down to a lab to see an experiment in which focused lasers create filaments in the air: 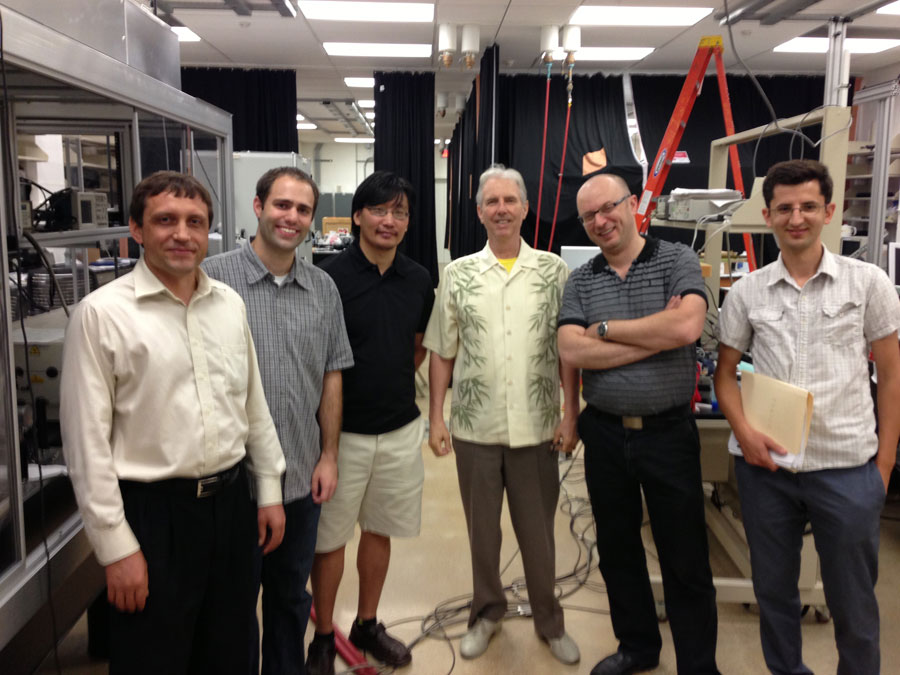 Although I wasn’t able to video the filaments, I shot video of the laser being focused:

After lunch, we went to Dr. Scully’s ranch. Besides being a world class physicist with seven US Patents in laser physics, Dr. Scully is a long time cattle rancher with a patent for a device to deliver medicine and nutrients into the stomach of a cow. As a result, he’s known in some circles as the Quantum Cowboy. 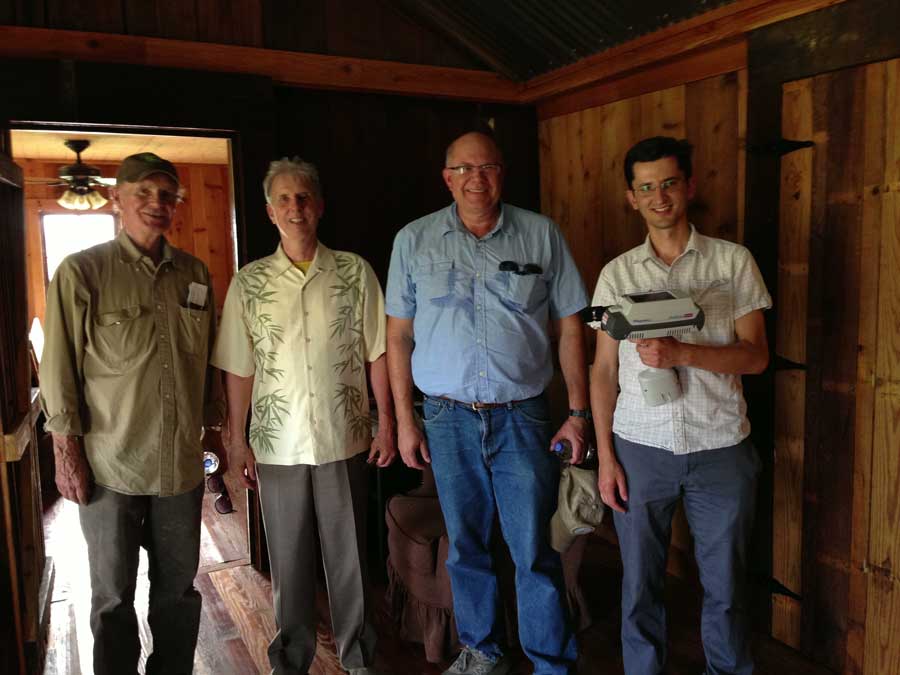 Here’s Dr. Scully to my right and Dr. Paul Smith to my left. Dr. Voronine is holding the instrument that they’re using for biophotonics.

In the picture below, Dr. Scully is patiently listening to my questions. 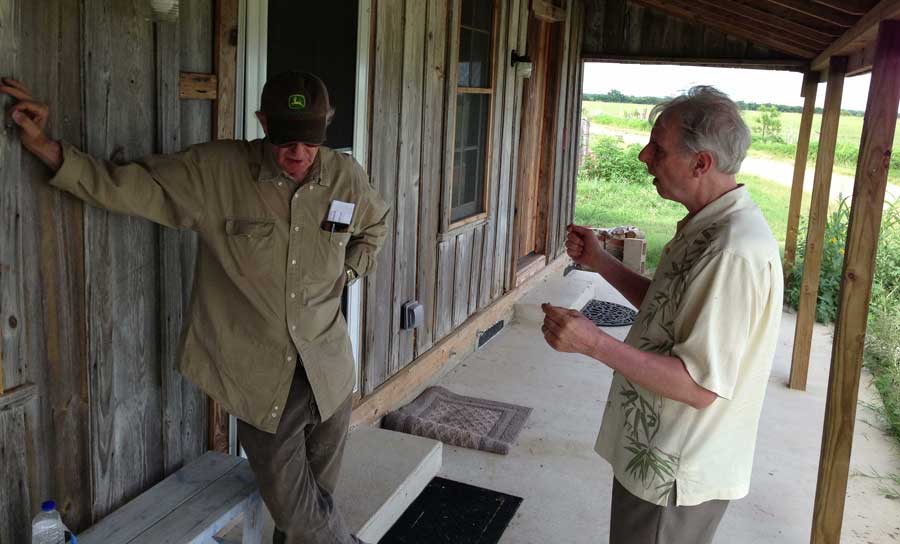 We drove to the river for a nature walk, where Dmitri demonstrated how the biophotonic instrument will be used to identify plants, starting with poison ivy: 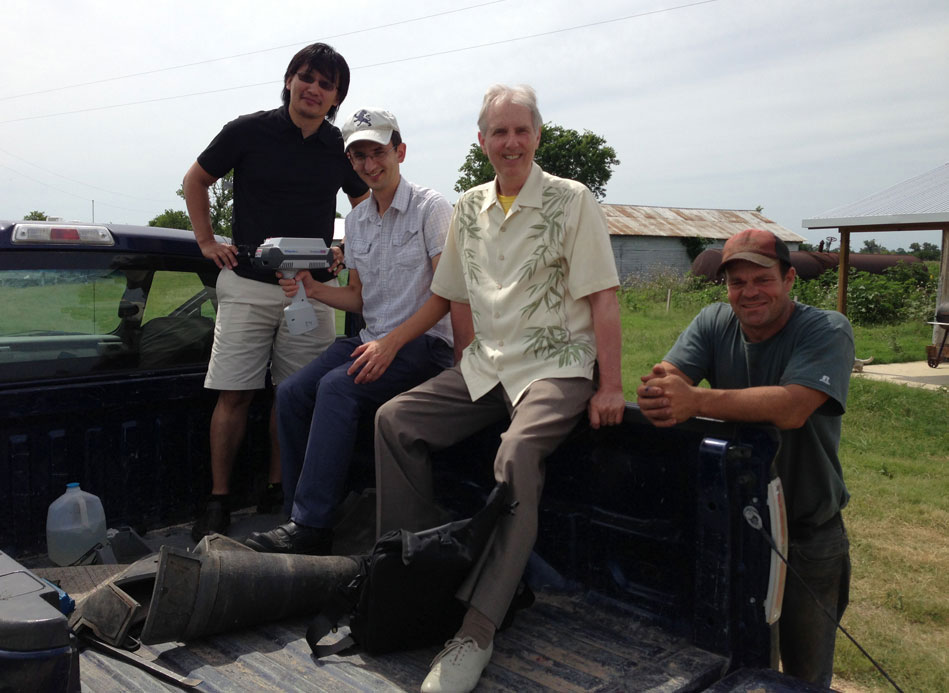 Next to Dimitri is Dr. Ariunbold (Ari) Gombojav from Mongolia. Ari has a PHD in theoretical physics and a PHD in experimental physics. He’s also active in the movement to prevent Mongolia from becoming a nuclear waste dump site for other countries. To my left is Dr. Scully’s son Rob, who is the author of a book about quantum physics for non-scientists called The Demon and the Quantum.

Institute for Advanced Studies at Austin

The next day, Dr. Smith and I went to quantum physicist Hal Puthoff’s Institute for Advanced Studies at Austin. (Dr. Smith worked with Dr. Puthoff in the army / CIA Remote Viewing program.) Since Paul is friends with Dr. Eric Davis the Senior Research Physicist at the institute, I was given the privilege of recording a discussion with Eric about the extremely advanced quantum physics theories that he deals with in his work on propulsion systems to take us to planets in our solar system and to nearby stars.

Before presenting our discussion with Dr. Davis in the institute, here’s a much briefer video outside after our one hour discussion inside:

Discussion with Dr. and Dr. Smith: